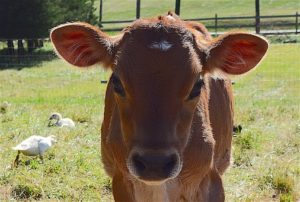 Two years ago I decided only to eat plants. Yes, that’s right, I became one of those pesky vegans. Contrary to popular opinion, I didn’t do it because I wanted to make people feel guilty about ordering a cappuccino or to drive my mother-in-law crazy about what to serve me for lunch. I didn’t even do it to assuage my concerns about animal welfare.* No, I was motivated first and foremost by the environment.

As a mum – and a member of the human race generally – I’m pretty keen for our species to survive. I mean, ideally I’d like us to flourish – you know, come to our senses, get rid of the numpties currently in charge, start being nice to each other, discover more about this weird and amazing universe we find ourselves in and, potentially, even colonise it. But I’ll settle for us just existing.

Sadly, all the scientific evidence suggests that we’re pretty much doomed, unless we ditch the meat and dairy. It’s one of those annoyingly inconvenient truths. Your burger and your latte are destroying the environment.

It’s quite simple, really. Animals require lots more land and water to farm than plants. When you farm animals you need both land for them and land on which to grow their feed. On a small planet with nearly eight billion people that’s not a good look. Much deforestation is due to people clearing land to farm animals, particularly cattle. What’s more, the millions of tonnes of methane that animals, like cows, release into the atmosphere makes animal agriculture even more toxic.

As one University of Oxford academic has pointed out, if we all turned vegan, we could drastically cut greenhouse gas emissions.

We might live in a world in which those in charge don’t listen to experts. But, when it comes to animal agriculture and the climate, the experts are telling us the same things. Over and over and over. Personally, I’d never, ever thought I’d go vegan. But once I knew the facts, it became the obvious thing to do. I didn’t want my daughter thinking I’d chosen a cheese sandwich over her future.

(*But the more I learn about the cruelty of modern animal farming**, the more I’m glad I don’t support it.