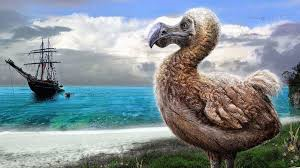 A bunch of Dutch sailors landed on Mauritius in 1598. The first Europeans to set foot on the Indian Ocean island, they encountered the awkward, slow-moving bird known as the dodo. Big and flightless, it was easy prey for them and their domesticated animals. By 1662 it was extinct.

Today, our only hope is that another ungainly, sluggish species is rendered extinct – and even more quickly. The climate denier.

Of course, I’m not saying we hunt down anyone who types “But the climate has always been changing/But the models aren’t reliable/But I don’t care about all those graphs showing rising temperatures from NASA and Nobel-Prize-winning scientists, I choose to believe this totally random guy on the net who says we’re actually entering a new ice age” into an online forum (tempting as that might be).

But why do they still even exist? The scientific consensus that global warming is undeniable and of human causation is now 99%. In science terms such a high percentage is practically unheard of. To deny it is akin to claiming the Earth is flat. Or gravity doesn’t work. Or, I dunno, what goes up doesn’t come down (perhaps it does a loop-the-loop and then that wiggly bit from the Macarena?). You can deny it. But you just look like a swivel-eyed, brain-dead loon.

Yesterday, a report published in the prestigious academic journal Geophysical Research Letters confirmed that climate models have accurately predicted global heating for the past 50 years. The study was comprehensive. It analysed 17 models published over the past five decades, beginning with a 1970 study and including the first four reports by the UN’s intergovernmental panel on climate change (IPCC).

The outcome was conclusive: climate scientists have a solid understanding of our planet’s climate system. Yes, you read it here first. Scientists, like, know stuff. And what they’re telling us is that the best time to act on the climate crisis was 50 years ago. But the next best time is now.

In the face of such overwhelming facts, climate deniers should cease to exist. And yet, they have proven remarkably hardy – not least because they’ve received enough corporate and financial support to install one of their own in the White House.

In a tenuously Darwinian move, some of them have even evolved to mimic other species, presumably in a bid to blend into the wider flock. In the UK, for example, those in power maintain they are not climate deniers, while simultaneously behaving exactly like them. In practise, this means they admit there is a climate emergency but refuse to do anything about it. They’re effectively saying, “No, I’m definitely not a dodo,” when everyone can see them for the graceless birdbrains they truly are.

We don’t have time for any climate dodos. Whenever one pops up on tele or online, don’t even bother to interact. Their day is already long gone.