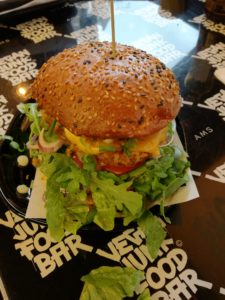 Too many people think a vegan diet is all about deprivation.

‘Oooh, but you’ve got to eat something nice sometimes!’ a family member once said to me, under the popular misconception that my daily diet consists of a handful of mung beans, a slither of tofu and lashings of self-righteous indignation.

The truth is I LOVE food and have always enjoyed cooking. And since I changed to a plant-based diet, I’ve never cooked more or eaten better. There is a whole new world of ingredients and recipes out there to explore. If you’re a foodie it’s not limiting, it’s really, really exciting. I’d been so stuck in a culinary rut before and now I’m trying out new flavours all the time. What’s more, while I eat healthily most days, junk food is still on the menu. That’s right, folks, being vegan doesn’t mean you have to eat quinoa-based Buddha bowls every night. You can still feast on burger and chips.

As a case in point, on a recent trip to Amsterdam I sought out an eating place I’d long since read about. Vegan Junk Food Bar does what it says on the tin. It’s a plant-based fast food joint that combines fries and ethics. To say it surpassed my expectations is an understatement. It was completely and utterly amazing!

There are three branches in the city, but I went to the one on Staringplein, which is a burger bar. The menu is short and to the point: a beef style burger, a chicken style burger and a selection of fries, as well as some meat-free bitterballen, the Dutch snack that’s minced up beef in breadcrumbs and deep fried (sort of like, erm, a bovine Scotch egg without the egg, so perhaps not really like a Scotch egg at all…).

I had a Daddy McChik’n, which is basically a chicken-style burger with plenty of salad, pickles and plant-based cheddar. Now it’s a long time since I’ve had an actual chicken burger, but it was 100% delicious. I stuffed it down me so quickly my nine-year-old dining companion raised her eyebrows. I also ordered a side of fries with truffle oil and a yummy plant parmesan called ‘Parm a san’, which was made from dried onions and the terribly-named-but umami-packed Nutritional Yeast (I know, I know, it sounds awful, but it’s a store cupboard essential if you’re going animal-product-free, trust me. It provides a sort of nutty, cheesy hit). Everything was lip-smackingly good, but the mayonnaise I had on the side was literally the best egg-free mayo I’ve ever tried: rich, creamy and unctuous. Even better, because Vegan Junk Food Bar is in one of the coolest, most cosmopolitan cities in Europe, you can enjoy a beer with your burger (courtesy of some local craft brewers, natch). Here’s what the Daddy MChik’n and the side of truffle fries looked like: 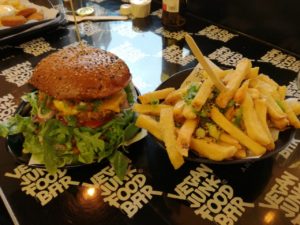 The afore-mentioned nine-year-old, who is what’s known as a flexitarian (i.e. she eats veggie and/or vegan most of the time, but succumbs to the lure of a chipolata at friends’ parties), had the chik’n nuggets off the kids menu and proclaimed them far superior to the actual chicken nuggets she’d insisted in ordering at a restaurant several days before. Here they are, in all their meat-free glory. 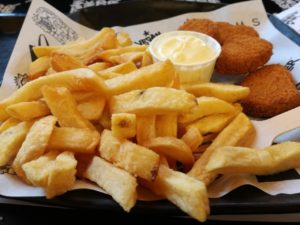 This is exactly the place to take any sceptics who think veganism’s all about denial. It’s not! It’s about kindness, sustainability and the joy of stuffing as many chips in your gob as you can in 15 minutes. Here’s hoping Vegan Junk Food bar – and its brilliant message – comes to the UK soon.