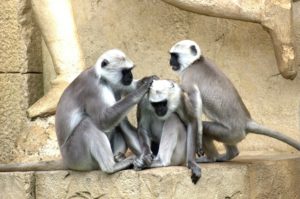 Once upon a time there were some strange little monkeys living on a rock spinning through the infinite emptiness of space. This rock was their only home. Nevertheless, they treated it with disdain. They polluted its air and water. They cut down its trees. They mined its metals and burnt its fossil fuels.

Some of the monkeys worked out that they had to be kinder to their rock – or things were going to end badly for them. Very badly indeed. But when they told the other monkeys, the other monkeys found it too hard to hear. Or they said they were lying. Or they put their fingers in their ears and shouted, ‘la, la, la!’ at the top of their funny little voices.

But then the worried monkeys came up with a different tactic. They decided to spread their message the way monkeys had always done – by telling each other stories. Their stories were about better, kinder and safer ways for the monkeys to live. Stories that would change, and ultimately, save their world.

That Dot was set up by one such strange little monkey. If any of you other little monkeys would like me to tell  your world-changing story, please email melissa@thatdot.co.uk