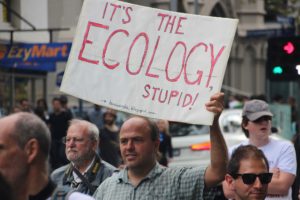 The climate emergency is now

Here’s the thing, people, it’s now official. We are living through climate catastrophe. The IPCC’s recent seminal report warns that we have just one decade to change our ways. And, let’s be clear, this isn’t about avoiding climate change. That’s already here and happening now. No, it’s about mitigating its worst possible outcomes and avoiding catastrophic climate breakdown. We’re literally talking about saving life on Earth.

I  know, believe me, I really know, it’s so hard to contemplate – and yet we have no choice. Even though our government is focused on renegotiating* a trade deal and the media is still obsessing over celebrity tittle tattle, the truth is we are in a state of emergency. There’s no more time to pay any heed to anti-science eejits, we need to band together and sort this mess out. Our kids will never forgive us if we don’t.

Neoliberalism is the problem

Our fundamental problem is the advanced stage of capitalism we’re living through, known as neoliberalism. Its creed of infinite greed just doesn’t work on a small planet with finite resources. If we carry on like this, it’s only going to end one way. Badly. We need to create a cultural shift towards a new way of living. We need to curb our suicidal tendencies of chucking mountains of plastic in the seas, burning fossil fuels and cutting down the forests that are our oxygen supply.

Individual actions obviously count towards this shift, so please reduce your use of plastics, eat less meat and dairy and use your car as little as you can. But what we also need to do is band together. Of course, it should be global governments who take the lead on this by declaring a state of emergency and putting in a wartime-like effort to sort it all out**. The thing is, that’s not going to happen any time soon. In fact, tragically, one of the consequences of the inequalities created by neoliberalism has been a rise in support for anti-science demagogues and climate change deniers.

What can you do?

Lots! We are running a blog series on sustainable living, each outlining three things you can do for the environment. Today our suggestions actually take the form of recommendations of environmental groups you can join:

* Or, rather, not renegotiating it

**Isn’t it strange how governments can mobilise the public and make huge, communal efforts for war, but not for ecocide? That’s the Western industrial military complex right there.