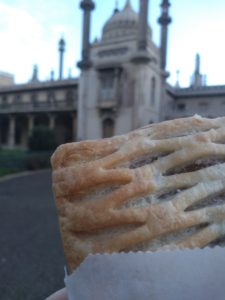 There’s not much to be cheerful about at the moment, what with Australia taking an early lead on the climate Armageddon and World War Three looming. So thank goodness for the launch of Greggs’ new vegan steak bake.

The high street baker’s vegan sausage roll is a real guilty pleasure of mine, so I had to get in quick and give this new plant-based pastry a go. Besides, anything that annoys Piers Morgan has got to be a winner.

I just had one for lunch. I went to buy it before noon, concerned about how quickly  the bake might sell out here in vegan-friendly Brighton. And I wasn’t wrong. The woman before me bought three vegan sausage rolls and two vegan steak bakes, meaning there was only one of the new faux meat delights left. Go early, people, to avoid disappointment.

The pastry did look a little pale, but when I bit into it, it was satisfyingly crisp. The Quorn-based filling was all brown and sludgy. It was hard to locate the onions. That being said, it was really  tasty, if somewhat salty (but, let’s face it, you’re not eating this for the health benefits). In terms of texture, I haven’t eaten actual beef since the eighties, but if my memory serves me well, this was a pretty good imitation, if rather less chewy (or was that my mum’s cooking?). All in all, it’s just the comfort food ticket.

Would I buy it again? Of course I would! Not because I’m a lemming, as Piers has so kindly claimed, but because I prefer my pastry-based snacks not to involve dead bodies or the acceleration of the climate crisis. Cheers to Greggs!