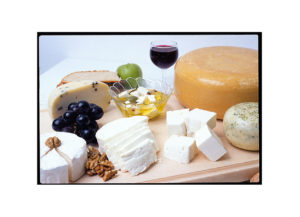 The joy of cheese

“I could never give up cheese,” says, well, pretty much everyone when you tell them you’re vegan. Interestingly, they hardly ever talk about meat. This could be, of course, because they don’t want to even mention corpse consumption in front of a patently puritanical extremist. But cheese, well, the general assumption is that’s safe ground – as, obviously, life without it (real-life quote from real-life recent conversation coming up) is “joyless”.

It’s safe to say Westerners have a huge weakness for cheese. It adds an unctuous, creaminess to dishes that many among us seem unable to imagine relinquishing. And yet, when you think about it – really, objectively, not, like “yum, I’m going to pop me a Babybel and have a quick mull on that right now,” but take a step back and look at the bigger picture – cheese is just plain weird.

It’s the curdled secretions of another mammal’s glands, for goodness sake. If your breastfeeding pal offered you some of her solidified and aged milk, perhaps with veins of blue mould running through it, you’d be unable to control your gag reflex. Why feel so very differently about the coagulated liquid from a bovine udder? At least your lactating friend is the same species as you. Cow’s milk, in any form, is not intended for human consumption. The fact you think it is shows the power of social conditioning.

Not for human consumption

Here’s the deal, I think you might have already heard this, but cow’s milk is for calves. And, as it happens, two-thirds of the human race can’t even stomach it – including most people in the Far East and vast swathes of Africa. Like all humans up until the agricultural revolution, the gene allowing them to digest lactose, the sugars found in milk, switches off after infancy. From an evolutionary perspective this makes sense, on account of weaning and, you know, not living off mummy milk forever.

I inadvertently undertook an experiment in this area myself, a while back when I spent a year living in Vietnam. Some of my local friends were extremely curious about this cheese stuff that all the Westerners they came across seemed to love so much. No matter how much they revelled in the delights of Vietnamese cuisine, tourists and Western immigrants always banged on about cheese and how much they missed it. I duly bought a block of New Zealand cheddar from the eye-wateringly expensive international shop and dished my pals up cheese on toast. What an afternoon that was! As four Vietnamese women lay groaning and clutching their stomachs on my couch, I felt horribly culpable. Digestive distress aside, they literally couldn’t believe anyone could enjoy anything so disgusting. The looks on their faces at the first whiff from the grill pan made me start to think differently about cheese too.

The ability to tolerate dairy into adulthood is actually a genetic mutation. It became ubiquitous in central European populations about 7,500 years ago because – counterintuitively – they suffered more widely from malnutrition after taking up farming. A reliance on a handful of crops led to a less nutritious diet than the one enjoyed by their hunter-gatherer predecessors. Bad weather or unfavourable conditions could often lead to crop failure – and starvation. Those Neolithic folks grew so hungry it seems they resorted to snatching the milk of their domestic ungulates. (I’ve written more about this here.) White supremacists uphold their ability to stomach dairy as evidence of their racial superiority, but they should understand it came about because one of their famished ancestors was reduced to squeezing the last few curds from the teat of a half-dead goat.

I haven’t eaten cheese in four years. And here’s the thing, I haven’t missed it. Not once. Now, I’m not saying that in some kind of over-zealous, “check me out, I am soooo vegan right now” boast. I just want to clear up a common misunderstanding. From the outside, people seem to think of veganism as being all about denial. But I am 100% honestly not going about my day struggling to avoid shoving a cheese or bacon toastie into my gob. I don’t find myself restraining a trembling hand from a pack of Cathedral City in the dairy aisle at the supermarket. And I’m not secretly salivating over a mate’s baked camembert when we go out for dinner. It’s not like that. Not at all.

For me, my transition to veganism was all about a shift in perspective. When it came to cheese, over a period of years, I happened to receive enough information that meant I saw it quite differently. The truth is, it began to stink of udder.

The climate and ecological crisis

And yes, omnivore trolls, if I were stuck on a desert island with nothing between me and death but a Dairy Lee triangle, of course I would bloody well eat it! But surely the more pertinent question is this: if you were living on a small, overpopulated planet in which the time to do something about an unprecedented climate crisis was running out and scientists told you the single biggest thing you as an individual could do to try and prevent the extinction of your own species was to stop eating the dead bodies and fluids of other species, would you do it? Well, would you?

Because there’s no denying that from an environmental perspective eating cheese is not a good look. Globally the animal agriculture industry creates 14.5% of all greenhouse gas emissions. The global dairy sector contributes four per cent of those emissions. This might not seem much but it’s double all emissions created by aviation. Considering we’ve already established that two thirds of people on Earth can’t even eat dairy, that’s a minority creating a huge and unnecessary carbon footprint. What’s more, just over half of those emissions are methane, which has the ability to trap up to 100 times more heat into the atmosphere than carbon dioxide. Cow farts aren’t so funny when you understand they’re speeding up the end of the world.

What’s more, cattle use up a lot of precious resources. The global water footprint of the entire animal agriculture is industry is 2,422 billion cubic meters of water – a quarter of the total global water footprint. About a fifth of that is related to dairy cattle. In a world in which one in ten people don’t have access to clean water, this just doesn’t make sense.

When it comes to land use, animal agriculture is hugely wasteful – 26% of the planet’s ice-free land is used for livestock grazing and 33% of croplands are used for livestock feed production. As one of the biggest and most common farm animals (there are around a billion of them), cows account for a huge percentage of these figures. Cattle farms are behind 80% of Amazonian deforestation.

‘But what about all the poor little cows?’ I hear you cry. ‘What’s going to happen to them in your post-Gorgonzola dystopia?’ And, yes indeed, what about them? I’m not proposing a mass cull. I’m a goddamn vegan, for tofu’s sake. The idea is farmers will breed less and less farm animals as demand for them falls. But make no mistake, these animals’ current lives are far from the pastoral idyll you see in the ads the dairy industry has force fed you. They’re not meandering about lush pastures under the gaze of a rosy-cheeked farmer. The reality is quite, quite different.

The US-style mega farm is now on the rise in the UK, using industrial, intensive methods to breed large numbers of animals, few of whom ever see the light of day. The life expectancy of a cow in the wild is around 20 years. In a dairy farm she will, on average, be culled at around six, when she will be exhausted from endless rounds of artificial insemination, pregnancy, milking and having her babies forcibly removed. Those babies, if they’re boys, will either be killed straight away, allowed to live for a few months before being slaughtered for veal or, if they’re really lucky, allowed to live for a whole actual year before becoming beef (although UK farmers are trying to lower the age limit to eight months. Way to go, guys!). The girls, on the other hand, will be forced to endure the same short, brutish life as their mums.

What’s more, the huge numbers of cows (along with those other farm staples, pigs and chickens) has created a terrible imbalance in terms of biodiversity. As animal agriculture has taken up more and more land, both for the animals and their fodder crops, so many wildlife habitats have been lost. Globally, we are now facing a wildlife crisis of unprecedented proportions, with a million species at risk of extinction. In the UK, our wildlife numbers are plummeting. According to the United Nations, the single biggest driver of wildlife habitat loss is animal agriculture. While this is devastating in itself, it’s also suicidal. We are part of nature, not separate from it. All our food sources are dependent on the complex ecosystems of the natural world. When they go, they’re taking us with them. So, if you want to save animals (and humanity), stop eating them –and their bodily fluids.

Now that we’re back at cheese, I hope you have an inkling of how I felt about the claim that life without it was “joyless”. How can joy come from eating the congealed milk from another mammal’s gland? Or the commodification of another sentience species and creation of an industry based on the abuse of their reproductive systems? Or completely unnecessarily incurring more environmental and ecological damage to a world already in crisis? Joy surely comes from trying to create a kinder world, which – incidentally – is what veganism is really all about.