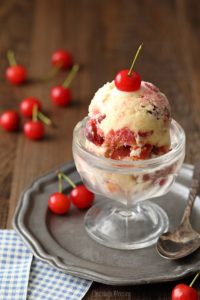 Back in 2011, a London company launched the world’s first breast milk ice cream. The response was predictable. Everyone frothed at the mouth about how disgusting it was…and then went back to sipping their lattes.

It’s a funny old thing social conditioning. It tells us drinking the milk from cow udders is entirely normal, while consuming the milk produced by our own species is taboo. And yet, logically, we all know that neither is what nature intended. Mammal milk is designed for mammal babies – hopefully of the same species as the lactating mother. It’s not meant to be drunk past infancy, in any shape or form.

But, I hear you say, it’s tradition, innit? In northern Europe we’ve been drinking milk for thousands of years. It’s one of the cornerstones of our diet, it’s where we get our calcium and, well, CHEESE!

And yes, of course, I can’t disagree that dairy has long been one of the pillars of Western culinary culture. But, obviously, the whole tradition argument never works. After all, it’s the tradition of the Yanomami tribe of Venezuala to make and eat a soup out of the ash left over after cremating a loved one. It once was an Inuit tradition to leave elderly people on ice floes to die when food was scarce. And it’s still tradition for one half of the human race to assume superiority over the other half, purely on account of what’s in their pants. Just because stuff’s being going on a long time, doesn’t make it ok.

And digging further down into the whole ‘tradition’ argument, it’s illuminating to consider just how milk drinking started in the first place. You see, for most of our existence, we weren’t milk drinkers at all. Homo Sapiens first appeared on the plains of Africa around 1.8 million years ago, but we only decided to start ingesting the milk from another animal’s teat around ten thousand years ago. For the huge interim period – i.e. most of our time on Earth – we were hunter-gatherers living in nomadic groups. We killed animals with our spears, but we didn’t nick off with their babies’ milk.  It was only after the agricultural revolution that dairy came on the menu.

For most of history milk was toxic to adult humans, because we couldn’t produce the lactase enzyme required to break down lactose, the main sugar in milk. As babies and small children we could digest the lactose in our mother’s milk, but the gene that allowed us to do so switched off as we grew up, to make way for the breastfeeding of younger siblings. After the agrarian revolution, a mutation appeared in certain populations that left this gene switched on for life.

This mutation happened two or three thousand years after humanity started tinkering around with dairy consumption. Around ten thousand years ago, when humans were just starting to settle down to an agricultural way of life, cattle herders in the Middle East began fermenting milk to reduce the amount of lactose in it, so they could eat it. They created the first yoghurt and cheese. They still couldn’t drink milk, however. The trait of lactase persistence emerged around 7,500 years ago, in what we now know as Hungary. It subsequently spread around Europe (vast swathes of the world’s population, particularly in Asia, still remain lactose-intolerant today).

The questions is why did these ancient farmers feel the need to persist in trying to drink milk? There have been many hypotheses. For a while, academics thought humans might have evolved to tolerate lactose because they lacked vitamin D and could obtain it from dairy. However, this idea only made sense because at the time the researchers also thought that milk drinking began much further north. Now we know it started as far south as Budapest, this argument doesn’t make sense. There’s too much sunshine, the main source of vitamin D.

The more recent idea is a whole lot more surprising. It seems likely that people started drinking milk because their health deteriorated after the agricultural revolution and they needed a new source of nutrition. Yes, that’s right, settling down in one place, planting crops and raising animals actually took a toll on the quality of people’s health. They became dependant on a handful of crops, after eons of a highly diverse foraged diet, and so consumed less nutrients. What’s more, these crops were dependent upon a whole range of variable conditions, including the weather, soil quality and water drainage. They frequently failed, creating food shortages in a populations that no longer just upped sticks and moved on when faced with hunger. Evidence shows that Neolithic farmers suffered tooth decay, anaemia and low bone density. Their height dropped five inches below that of their Stone Age ancestors. When a famine broke out, those who could stomach the milk meant for livestock’s babies were more likely to survive – and their genes to live on. In this way, the associated gene became ubiquitous in European populations.

So it seems that the roots of our milk drinking tradition lie in ancient farmers’ attempts to avoid malnutrition. They took it up to try and fight off starvation, rampant disease and low infant mortality rates. Putting dairy in this context makes you look at the continuation of the habit in the modern world a little differently. There’s simply no need for well-off people in rich, urban societies to drink milk.

I hear you. I really do. The Milk Marketing Board and then Dairy UK have done an amazing job of convincing everyone that we need milk products for strong bones and teeth. But the truth is that there are better sources of calcium out there. Don’t just listen to me though, listen to the most advanced medical school on the planet. Harvard University says that the best source of calcium isn’t dairy, partly because of its links to three of Western society’s top five killers. Milk contains a high percentage of unhealthy saturated fats. Consuming too many of these causes a build-up of cholesterol in your arteries, which, in turn, can lead to heart attacks and strokes. Dairy products have also been linked with increased risk of ovarian and prostrate cancers.

The simple fact is you don’t need to ingest cow booby juice to get enough calcium. You can obtain calcium from kale, cabbage, watercress, rocket, broccoli, pak choi, molasses, figs, oranges, almonds, tofu, pinto beans and sesame seeds. I mean, our prehistoric ancestors managed to do so for millennia, right? And in the modern world which country has the longest life expectancy? That’s right, it’s Japan, a country where most people can’t even stomach milk.

There’s even a question mark hanging over how absorbable the calcium in dairy is. A study by John Hopkins University in Maryland, USA, showed that the increase in the intake of dairy products in China and India between 1999 and 2004 didn’t result in an increase in people’s average calcium levels. In fact, the trend seems to be that greater dairy consumption results in greater risk of osteoporosis. The bone thinning disease is more common in dairy-eating countries. You’re more likely to break a hip if you’re an older woman in Scandinavia than in Asia or Africa, where little or no milk is consumed.

The only pro-milk argument left is, well, CHEESE! But I’m going to leave that little gem for a whole separate blog post another day. In the meantime, just look at this little cutie… 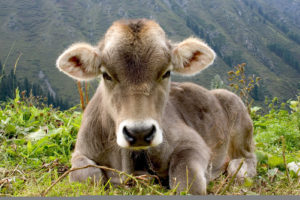 Consider the notion that you’re stealing its food because some starving Neolithic farmers got so desperate they decided to try drinking the fluid produced by the mammary glands of one of its distant ancestors.

Now, go and enjoy that cappuccino!