‘How do you know if someone’s vegan?’

I saw this joke on a birthday card recently. I laughed so much I nearly split my hemp trousers. Because vegans, of course, are a bunch of preachy, self-righteous killjoys who love nothing more than yakking on about veganism all the time and making people feel guilty about enjoying the odd bacon sandwich. Or so the stereotype goes. Even though plant-based eating is enjoying a surge in popularity, the mainstream media and popular culture are full of this kind of stuff. In fact the adjective most often paired with the word ‘vegan’ in certain media outlets is the carefully considered ‘militant’*. Like trying to eat a more environmentally friendly diet that benefits not only animals, but also other humans and my own health makes me some kind of confrontational extremist who likes to phone up dairy farmers and scream ‘Rapist!’.

When I became vegan myself these negative associations made me more than a little worried about other people’s reactions. So I turned to vegan social media feeds, blogs and magazines for advice. The overwhelming consensus was that all new vegans will find themselves constantly fielding questions about their lifestyle choice, so to make sure to have lots of answers  ready by swotting up on the facts and figures. That way when Auntie Jean asked if I’d still refuse to eat meat if I ever found myself living a hunter gatherer lifestyle, I’d know how to respond. This is such a known thing that there’s even a game doing the rounds on social media about it. It’s called ‘Defensive Omnivore Bingo’. Vegans are to tick off a question whenever someone asks them it. 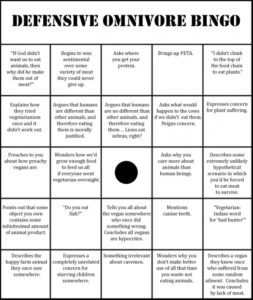 But here’s the thing. My bingo card remains unmarked. I haven’t crossed off a single thing. You see, my experience is that when people find out you’re vegan, they don’t ask you about it. And because I don’t want to be preachy, I don’t feel like I can offer up any information unasked. So we end up just not talking about it. Which means I’m left with all that information buzzing around my brain about how eating tofu could save the world for the next generation and no outlet for it (which maybe explains this blog!).

Now, I’m going to indulge in a bit of stereotyping of my own and say that I think this might be because I’m British – and also, perhaps, because I’m not a spring chicken. When we find something difficult to talk about, us mid life Brits tend avoid it. It’s perhaps why so many of us still end up talking about the weather. I think when a lot of Brits sense a conversation could be headed in what they fear might be a slightly tricky direction, they often veer away from it (I’m guilty of this myself). Unfortunately, the fact so many people think veganism is a tricky subject in the first place is all down to that misinformed stuff they’ve read or seen. And therein the British 40-something vegan paradox lies…

*Just like when vegetarianism was a relatively new thing and every time it was written about it was paired with the word ‘strict’, as in ‘Ooh, she’s a strict vegetarian.’ Which always made me wonder what a non-strict veggie looked like. Someone who intermittently broke up a diet of nut roasts and mung beans with the odd dish of braised liver?